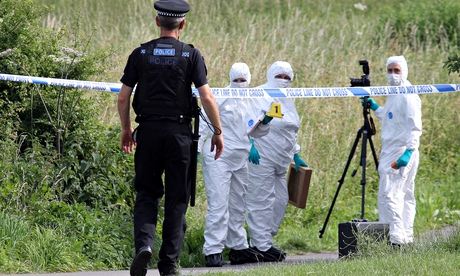 Detectives investigating the brutal murder of a university student stabbed to death in Essex believe she may have been targeted because she was wearing traditional Islamic dress.

The woman, a Saudi Arabian national in her early 30s, was attacked as she walked alone on a quiet footpath in Colchester on Tuesday morning.

Police said the woman was wearing a patterned headscarf and a dark navy head-to-toe robe, known as an abaya. She suffered severe facial injuries and stab wounds to her body.

A 52-year-old man is being questioned by police in connection with the killing.

DS Tracy Hawkings said officers were keeping an open mind on the motive for the attack. « We are conscious that the dress of the victim will have identified her as likely being a Muslim and this is one of the main lines of the investigation but again there is no firm evidence at this time that she was targeted because of her religion, » she said.

The Saudi embassy said its ambassador to the UK was taking an active role in the case. « Prince Mohammed bin Nawaf expressed in a telephone call on Tuesday to the brother of the deceased his sincerest condolences to her family, affirming the embassy’s speed in taking all the procedures for the transfer of the body of the deceased to the kingdom. He also asserted that the case is in his personal attention, » it said.

Uniformed officers stepped up their patrols around the site of the stabbing, which took place between 8.30am and 11am near St Andrew’s infant and nursery school.

« We’re a very inclusive school with 18 languages spoken so we wouldn’t limit this advice [to children wearing tradition Islamic clothing], we offer the guidance to all children. We have a very good relationship with the police. »

Three months ago a 33-year-old man, James Attfield, was stabbed to death in nearby Castle Park. Detectives said there were « immediate similarities » between Tuesday’s attack and that on Attfield, who was stabbed more than 100 times.

The Rev Hilary Le Seve, a vicar at the nearby St Andrew’s church, said: « Obviously it’s a tragic event and it’s tragic for all the friends and the family of this woman, and that’s where our heart is, to her friends and family. Most of us live very peacefully in this area and nobody likes this to happen. »

The Saudi woman was a student at the University of Essex, which said it had opened a helpline for students and staff following the murder.

A spokeswoman said: « Our thoughts are with the family and friends of the young woman who died yesterday, and we are deeply saddened by this tragic incident. While we are awaiting confirmation of her identity from Essex police, we understand the woman was one of our students from Saudi Arabia.

« Following advice from the police we have reminded our community of our safety procedures. There is 24-hour security at Colchester campus and our students union shuttle bus is running from campus to surrounding areas in the evenings. »

Police said anyone who could assist the inquiry should contact the major investigation team on 01245 282103, telephone Essex police on 101 or call Crimestoppers anonymously on 0800 555 111